You are here: Home / Sports / Sioux City Olympic runner advances to the final 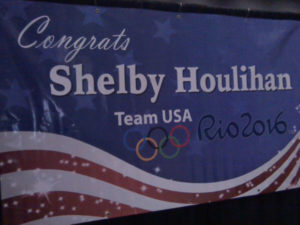 Iowan and Olympian Shelby Houlihan has qualified for the finals of the women’s 5,000 meter race on Friday.

Houlihan used a strong finish to take 4th place in her qualifying heat this morning at the Rio Olympics.

A crowd of 300 supporters watching at the Sioux City Convention Center cheered as Houlihan raced from 9th place with three laps to go to her 4th place finish. Houlihan’s uncle, Marlin Jeffers, was among those in the crowd rooting for Shelby.

“It was very exciting,” Jeffers said. “Shelby always likes to lay back and then, during the last few rounds, she kicks it in. We’re very proud of her.” Houlihan is a Sioux City East High School graduate (2011) and was an All-American runner at Arizona State University. Jeffers says things have worked out better than expected with Houlihan qualifying for the Rio games.

“Her whole plan was to make the 2020 Olympics and this just happened,” Jeffers said. “The family is excited. I think Siouxland is excited. You could hear that today. So, we’re excited to see what she’s going to do on Friday.” Houlihan finished the race with a qualifying time of 15:19:76.