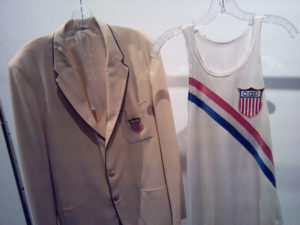 As Sioux City East grad Shelby Houlihan prepares to run the 5,000 meter race at 2016 Olympics in Rio, the Sioux City Public Museum is making plans to display the memorabilia of a local high school graduate who competed in two Summer Olympics.

Museum Director Steve Hansen recently unveiled some of the items that’ll be part of the planned display. He says the first items donated were the Olympic blazer and track singlet from George Howard Lambert who graduated from Sioux City Central High School and competed in the modern pentathlon at the 1956 and 1960 Olympic Games.

The first items had been in a box in a Sioux City home the last 50 years. Hansen says Lambert’s longtime partner donated some other items. “She went what they call the diplomas, Olympic diplomas. We have six more of these from the Pan American Games and from Melbourne,” Hansen says. Lambert won gold in several events in the third Pan-American Games in 1959 in Chicago. Hansen says a portion of the collection will be featured as part of a new permanent exhibit featuring local sports history that is planned for late 2017.

He says they are remodeling part of their permanent exhibits in the southeast corner of the museum into a sports exhibit and are working with the Siouxland Sports Hall of Fame and other organizations to put it together. Museum staff members are actively seeking local sports memorabilia to be showcased. Houlihan is scheduled to run her race today.