You are here: Home / Agriculture / Investors sought for salmon farm near Harlan

The developers of a new company in western Iowa are seeking investors for a salmon growing operation.

Jackson Kimle the vice president for business development of the Inland Sea company, says they are bringing a Danish system to Harlan. He says it’s an indoor recirculating aquaculture system that will produce 5.3 million pounds of Salmon. Kimle’s father Kevin is the company CEO and a professor at Iowa State University.

He says they chose Harlan for several reasons — including its location and availability of power. “The energy prices are just very, very low. One of the lowest spots in Iowa and maybe even in the world, I’m not sure how it compares worldwide…and in addition there’s a lot of advantages for us to be able to ship salmon to Chicago,” Kimle says.

He says there’s a lot of frozen shipping that goes through nearby Omaha and then to Chicago, making it a good option for getting the product out. Iowa grows a lot of corn and soybeans that’s used for animal feed, but Kimle says there will need to be some work done to take advantage of that for fish feed. 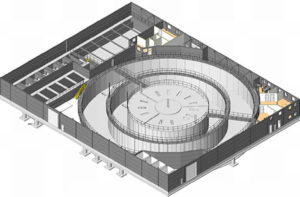 View of what the Inland Sea salmon plant would look like.

“It’s a little bit of a challenge interestingly enough, because there just aren’t that many feeds yet that are produced in Iowa for aquaculture. The feeds that are built are just a little bit different and the protein contact and oil content is very important in fish,” Kimle explains. “And then just building a feed that floats, a lot of our extrusion technology is just not built for that. So at first, we may have to import a little bit of Danish feed.” He expects the aquaculture feed industry to rapidly develop in Iowa as the demand grows.

The company is seek approximately 12 million dollars in capital from accredited investors.

“Due to SEC rules and our deal, an accredited investor, you have an annual income of $200,000 a year, or $300,000 if you are married and then a net worth of a million dollars, not including your primary residence,” according to Kimle. He says the plant would require less than one dozen workers.

“We’ve estimated it will bring about 20 in this facility to the area. Fifteen of the jobs will be involved in fish production and we believe a significant amount of that 15 will be highly-skilled labor,” he says. The other jobs will be processing the fish.

“We sill stun, bleed and gut fish on site — which is referred to as minimal processing — so there will be a manager and a small team that does that,” Kimle says. A facility that is billed as the largest land-based fish farm in North American raises Australian sea bass in Webster City. Kimle says Iowa’s business climate and location make it attractive for fish farming.

“Iowa is very centralized between a lot of large metropolitan areas. And then with the development of feed ingredients over the long run here in the midwest, it’s the spot to be — especially with energy feed and distribution, its’ a fantastic spot,” according to Kimle.

Company information says the primary sources of salmon consumed in the U.S. are Norway, Scotland, and Chile with most salmon consumed in the midwest coming from approximately 45-hundred miles away. The facility is expected to cost around  $27.6 million. Construction is anticipated to begin in 2016 with first harvest planned for 2018. The company projects annual revenues of approximately 16 to 20 million dollars, depending upon prices and actual salmon production.

Annual earnings before interest, taxes, depreciation, and amortization are projected between 4 and 7 million dollars.