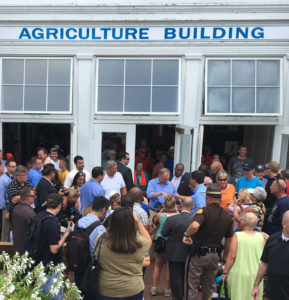 “This is a great celebration of American agriculture from the state that is really known for it,” Kaine said and a fair-goer replied: “That’s what it’s all about.”

Kaine, a former Virginia governor who is now a U.S. Senator, also did what nearly every candidate does when they visit the fair. He stopped by the Pork Producers’ grill and ate a pork chop.

“We have a good fair in Virginia, but no pork chops,” Kaine told reporters. “…Turkey legs, yes. Pork chops, no. That’s the difference. These are very, very good.”

Tom Vilsack, the former Iowa governor who is now President Obama’s Secretary of Agriculture, was along for the walk-through. Kaine suggested it will take hard work for the Clinton-Kaine ticket to win Iowa.

“He’s right. This is going to be tight, tough. We’re going to have to campaign every single day, but I have to tell you, I like our ground game,” Vilsack told reporters. “I like the fact we’re working in every corner of the state. We’ve got offices in every corner. We’ve we’re well-organized.”

The two men were asked if they had talked about both being considered by Hillary Clinton as a potential running mate. Vilsack told reporters Clinton “made the right choice.”

“He’s been a terrific senator and there’s no question he’s a terrific running mate and a great partner for Secretary Clinton,” Vilsack said.

“She had an embarrassment of riches and I’m humbled to be on the ticket,” Kaine said. “We have a history because Tom was finishing his second term as governor when I came in and Tom was a sort of governor’s governor, especially around on an issue dear to my heart which is really making government work for people, to focus on results that people can measure.”

Some fair-goers were not sure why a roving band of media with cameras and microphones were following the two men through the fairgrounds. A few who recognized Kaine yelled, “Vote for Trump.” One man leaned over the Radio Iowa microphone to make his voice heard.

Supporters in the crowd posed for selfies with Kaine and a couple were able to get Kaine’s autograph on campaign posters. Roy Kapteina of Muscatine plans to vote for the Clinton-Kaine ticket. He took several photos of Kaine on his smart phone.

“We’ve seen Hillary many times, but we’ve never seen him before,” a smiling Kapteina said.

During his visit to the state fair’s Agriculture Building, Kaine had a brief conversation about the Affordable Care Act with the parents of a child who had heart surgery shortly after he was born. He returned to the topic later as he spoke with reporters Kaine said the conversation with those parents gave him “energy for the battle ahead.”