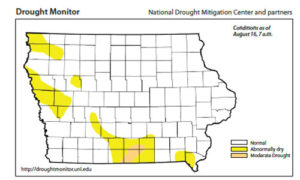 Finding a spot in Iowa that has drought conditions is getting harder and harder as we move toward fall.

The DNR’s Tim Hall says the only are is in south-central Iowa.”Very small area in and around Wayne County shows just a little bit of the lowest level of drought — a little bit of dryness — but for the most part the state is looking good and the trend has been toward continued improvement,” Hall says.

The hot dry period that often comes in July and August didn’t materialize this year.

“There’s a lot of moisture around, there’s a lot of water in the subsoil and when the plants are taking up that water and evapotranspirating, it tends to stay out there,” Hall says. “So the humidity levels are up the temperatures are up. It’s remarkably wet for this time of year I think.” Iowa’s lakes and rivers are also well supplied.

“If you look at the stream flow index which is a little graph put together by our friends at the U.S. Geological Survey — they rate the stream full against what it is supposed to be this time of year. So it’s not just a straight how full are the rivers, it’s how full are they supposed to be compared to where they are supposed to be ,” Hall explains. “And right now, for a vast majority of the state, stream flows are above normal to in some cases much above normal.” Hall says the good flow now will help if things get drier.

“Precipitation starts to drop off in September and October, November, December, so we are kind of on the downhill side when we start to see rainfall become lower and lower, so having good streamflow is a good place to be,” according to Hall. Hall says the water summary reports have been pretty routine this year.

“When we’ve been through a year like this one when conditions have tended to be fairly average, there’s sometimes not a lot of interesting things going on in hydrology. And from our perspective that’s a good place to be. No draught and no flooding — just kind of right down the middle,” Hall says.

Overall, rainfall has been well above normal for four of the past six weeks in the state. About two-thirds of the rain over this past two week period fell on August 11 and 12, with two to four inch amounts common over a large area of central and east central Iowa.