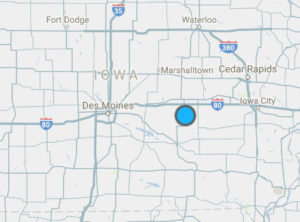 The blue dot on this company map shows the location of the wind farm.

A Kansas-based company is planning to install wind turbines along a 32,000 acre ridge between Montezuma and Deep River. Poweshiek County Supervisor Trevor White says Tradewind Energy has been conducting studies in the area for about eight years.

According to the company’s website, the “English Farms Wind Project” will produce enough energy for 60,000 homes. White says everybody in the county will benefit.

“Property taxes, even lease payments to the landowners and the surrounding owners,” White says. “It is a win-win situation for a lot of people if you do accept a lease.” White says.

More than 250 landowners in the area who sign leases will be paid royalties. The turbines will be placed in an area south of Interstate 80 and east of Highway 63.