You are here: Home / Agriculture / New Iowa Dairy Princess is from Earlville 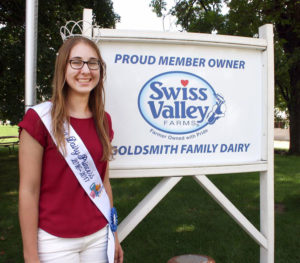 The new Iowa Dairy Princess is ready to start her reign after being crowned at the Iowa State Fair.

Katelyn Goldsmith of Earlville served as last year’s Delaware County Dairy Princess and says she was shocked to hear her name called as the winner of the state competition. Goldsmith says it’s hard to pinpoint why she’s so passionate about the dairy industry.

“It’s a tough question,” Goldsmith says, “I’d have to say a lot of different things I’m passionate about, but just the people in the dairy industry, how much they care about the product they’re producing, the animals they’re taking care of and insuring that the consumer gets the best product that we can produce for them.”

Goldsmith was chosen from among twelve contestants. She grew up on a dairy farm where her parents, Jim and Kristi, and the rest of her family milk around 150 cows. Goldsmith just graduated from Beckman Catholic High School and she’ll attend Iowa State University, where she’ll major in Dairy Science and Animal Management.