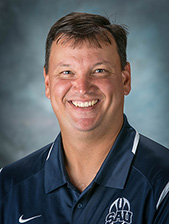 As the St. Ambrose football team gets ready for a new season the Fighting Bees are still motivated by what did not happen in 2015. Despite an 8-2 record and a number 20 national ranking St. Ambrose was left out of the NAIA playoffs.

“The players have a little bit of a chip on their shoulder”, said St. Ambrose coach Mike Magistrelli. “Anytime you go 8-2 you expect to qualify for the playoffs but it just was not one of those years and the kids are using that as motivation.”

With 11 starters back from last year the Bees want to make a return to the playoffs and the season may hinge on how quickly the line develops on both sides of the ball.

Pat Smith returns for his second full season as the starting quarterback. The Springfield, Illinois native passed for more than 2,400 yards and 19 touchdowns in 2015 for an offense that averaged just over 28 points per game.

“Having a veteran quarterback certainly makes everything a lot easier. Pat understands the system and there are little thing he does that you don’t have to teach him or talk about.”

St. Ambrose opens the season at home on September 3 against Concordia of Michigan.