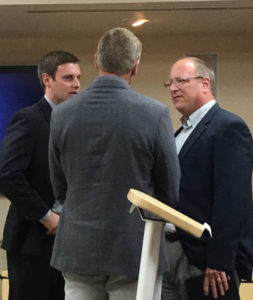 Jere Null, CEO of Prestage Foods of Iowa, (right), visits with plant supporters after a public hearing in Des Moines.

Sixty percent of the hogs to be slaughtered at the proposed pork processing plant near Eagle Grove will be owned by the family business that will own the plant.

“We’ve been in Iowa since 2004. Our Iowa farming operations produce over a million and a half hogs a year,” Jere Null, chief operating officer of Prestage Foods of Iowa, said yesterday during testimony before a state board.

Prestage Foods of Iowa is the newest division in the Prestage Farms family of companies.

“Prestage is family-owned business based in Clinton, North Carolina, founded by Bill and Marcia Prestage in 1983. Mr. Prestage spent his lifetime in the feed and livestock business. Today, we’re a top five turkey and hog producer.. Our company operates in seven states and has almost 2000 employees,” Null said. “Today, we have three generations of family members actively involved in the day-to-day management of the company.”

State officials have approved nearly $11.5 million worth of state tax credits for the proposed Prestage Foods of Iowa plant near Eagle Grove. Wright County’s Board of Supervisors meets Monday and is expected to approve a package of local incentives for the project.

Null told state officials yesterday that 40 percent of the hogs that will be slaughtered at the plant will come from independent farmers.

“The plant is important for the Iowa pork industry,” Null said. “Pork consolidation has led to fewer buyers of livestock in Iowa. This plant will create new markets for those. It’s supported by Iowa pork producers who know that increased competition will lead to better price transparency.”

Critics like LouAnn Krabbe of Belmond say the plant will be the poster-child for vertical integration of the industry.

“The profit won’t stay in Iowa funding education, mental health facilities or cleaning up our water,” she said during public testimony before the Iowa Economic Development Authority Board of Directors. “It will be used to enrich the Prestage family.”

The Prestage Foods CEO told state officials this week the plant would have a $450 million annual impact on Iowa’s economy.