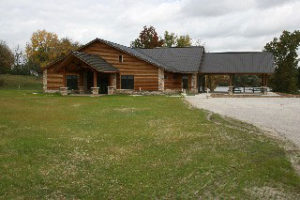 A cabin at Lake Darling.

Iowa Department of Natural Resources state parks bureau chief Todd Coffelt says the group Friends of Lake Darling was the driver behind getting the cabins built.

“They’ve taken it upon themselves to raise money through grants, to ask for funds from foundations, to essentially do a bake sale,”Coffelt says. “they showed up many days, they undertook many efforts and throughout time they were able to see a bigger vision for the park that had originally been created.”

The group raised 50 percent of the funds to build the new cabins, or around $563,000. He says the new cabins are an upgrade from what was available as the park had six camping cabins, but didn’t have any cabins for year-round use. Each cabin sleeps six, with two bedrooms, a full kitchen and bathroom, deck with Adirondack chairs, heating and air conditioning.

Coffelt says the new cabins add to the choices available statewide for Iowans. “With the enduring effort of the Friends of Lake Darling, they’re really going to make an effort of where folks can go and where they can enjoy Iowa’s outdoors. And Lake Darling is going to be a premiere location for everyone to visit,” Coffelt says.

The DNR held a ribbon cutting for the cabins Tuesday where it was announced that the Friends of Lake Darling group is the recipient of the National Association of State Park Directors (NASPD) 2016 President’s Award for its work to get the cabins built.

The friends group formed in 2001 at the time the DNR began making plans for a major lake renovation at the park. The lake was drained in 2008 and workers removed 309-thousand cubic yards of silt from the lake bed in a 16 million dollar renovation. The lake is named for “Ding” Darling, a Pulitzer Prize-winning Des Moines Register cartoonist who founded the National Wildlife Federation.

Photo courtesy of the DNR