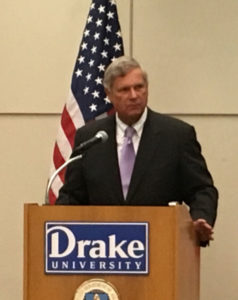 “We have a serious problem with water quality and frankly all of us — all of us — are in some way accountable and responsible for that problem,” Vilsack says.

Vilsack says his federal agency this year has committed “a record amount” to help finance on-the-farm conservation projects. And Vilsack is promising to “forcefully” make the case that more action is necessary at the state level.

“We can be big and bold in our thinking about how to address it and we can create an Iowa that not only has clean rivers and clean streams, but also is inviting,” Vilsack says, “in all parts of our state.”

Vilsack warns there are dire consequences for the state is policymakers fail to reach an agreement.

“I’ve been calling upon our political leaders from both parties, from all branches of government, to basically get themselves in a position in 2017 at the beginning of the legislative session of committing to getting something done,” Vilsack says, “providing the tools to folks who live and work in rural areas, providing the tools for those who are living and working in urban centers to be able to address in a very significant and massive way this issue of water quality.”

Vilsack says Minnesota and Wisconsin have “aggressive” water quality initiatives underway and states along the Gulf of Mexico have “potentially billions of dollars” to spend addressing water quality — money that comes from the B-P oil spill settlement.

“So we’re in the middle of this and that creates, I think, an additional responsibility for Iowa to move forward,” Vilsack says.

Vilsack made his comments Thursday afternoon during a speech in Des Moines. This past January — just before the 2016 Iowa legislative session began — Vilsack joined Republican Governor Terry Branstad at a statehouse news conference to call for spending far more state tax dollars on projects that improve water quality. The 2016 legislative session ended without agreement between the two political parties on the issue, however.

Lawmakers are being pressured to take action by federal regulators who cite the growing “dead zone” in the Gulf of Mexico that experts say is caused by farm chemical run-off that drains into the Mississippi River. In addition, a lawsuit filed by the Des Moines Water Works has challenged how a group of northwest Iowa counties are managing drainage from farm fields.