You are here: Home / Agriculture / Vilsack says diversity has been the watchword for his USDA tenure 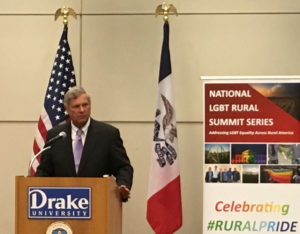 Former Iowa Governor Tom Vilsack has been President Obama’s first and only Secretary of Agriculture and he is starting to reflect on his tenure at the USDA.

“I’ve been challenged in the last couple of months to start thinking about, you know: ‘You’ve spent seven years of your life in this job, what can you say about the department, how would you be able to summarize what you did in one word? And I think the word I would pick if I had to do that would be diversity,” Vilsack said this week.

Vilsack made his comments on Thursday in Des Moines. He was the keynote speaker at a conference organized by the USDA to discuss the challenges gay, lesbian, bisexual and transgender Americans face in rural parts of the country. The USDA has held similar conferences in 14 other states.

“It’s in the best interest of USDA for us to have these conferences, to continue this outreach effort because in doing so we send a message about USDA that we are an inclusive department,” Vilsack said. “When I came into this office almost eight years ago, our reputation around the country was not one we were particularly proud of in terms of civil rights. African Americans referred to the USDA as ‘the last plantation,’ and with some justification.”

When Vilsack became US ag secretary in January of 2009, there were more than 20-thousand pending discrimination complaints against the agency from African Americans, women, Native Americans and Hispanics. Vilsack said “many” of those claims have been settled. In addition, Vilsack issued an executive order barring discrimination against gay, lesbian, bisexual and transgender Americans who applied for USDA programs.

According to data distributed at the conference, 10 percent of same-sex couples live in rural areas and more than 66,000 Iowans identify as gay, lesbian, transgender or bisexual.