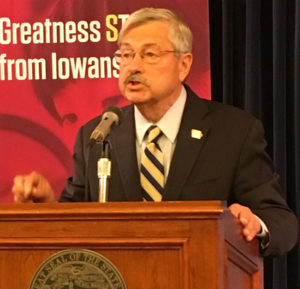 Governor Terry Branstad today said the reports aren’t ready yet, but his decision to have the state pay three private companies to manage care for Iowa’s 560,000 Medicaid patients is saving the state “significant” money.

“Replacing the unmanaged care we had before is stopping significant fraud and abuse that had occurred previously in our state,” Branstad said during his weekly news conference (audio is here).

The switch to managed care for Iowa’s Medicaid program happened April 1, 2016. Branstad today confirmed an Associated Press report that during April and May, the three for-profit companies now managing Iowa’s Medicaid program were not fined for making late payments to Iowa health care providers. Some Democratic legislators have questioned that decision, but the governor said it made sense to waive those fines during the transition.

“Those that want confrontation, I guess, want a confrontational approach,” Branstad said. “But what we want to do is have a collaborative approach that gets the services to people and addresses the problems as quickly as possible.”

Branstad told reporters he’s getting “good reports” about the new system. Under the old system, Branstad said it wasn’t easy to detect Medicaid fraud among Iowa doctors, hospitals and other health care providers.

“You submitted the bill and got paid,” Branstad said. “You didn’t know whether the service was ever provided.”

Now, the private companies managing care of Medicaid patients in Iowa require “verification,” according to Branstad.

“What we want to do is make sure that the Medicaid patient is receiving the services that the provider is saying that they are doing,” Branstad said. “In many cases where the fraud occurs is they’re claiming they’re providing services that are never provided. We don’t want to have that happen anymore.”

In 2009, Branstad hired a Minnesota company to use what was described as a “very sophisticated” analysis of Medicaid claims. A 2013 report indicated the company had saved the state more than $86 million over three years by catching errors or outright fraud and forcing providers to repay the state for inappropriate billing. Branstad’s administration said three years ago that the majority of Iowa’s more than 20-thousand Medicaid providers “bill appropriately,” but fraudulent claims “can cost taxpayers millions.”

The Minnesota company found some providers were, for example, billing Medicaid for renting a wheelchair for a patient when it would have been cheaper to buy it. It also found some contractors taking advantage of a program that helps low-income Iowans stay in their own home rather than move into a nursing home. One contractor was submitting a $700-a-month bill to mow a lawn.