You are here: Home / News / Pence accuses Clinton of ‘pay to play’ between foundation, state department 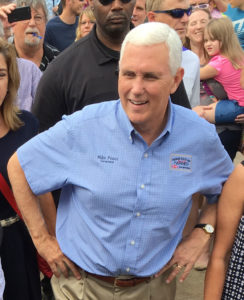 Republican vice presidential nominee Mike Pence campaigned in Cedar Rapids this afternoon, blasting Democrat Hillary Clinton over her use of email while she was secretary of state.

Last week, the Clinton Foundation announced it would no longer accept foreign or corporate donations if Clinton becomes president. Today, Bill Clinton announced he’ll no longer raise money for the foundation and will not serve on its board. Pence said that’s not enough.

Pence is joining Donald Trump in calling for Clinton to shut down the Clinton Foundation now.

Pence toured a business in Cedar Rapids, spoke to about 200 people for about half an hour, then fielded four questions. One man asked if Trump’s attorney general would be able or willing to prosecute Clinton.

“Look, no one is above the law. That is an enduring American principle,” Pence said, to applause.

Pence stopped there, then pivoted and called on Clinton to answer questions in public about the Clinton Foundation.

“Hillary is hiding and Donald Trump is everywhere,” Pence said. “I mean he gave four or five major addresses last week all over the country on a broad range of issues and Hillary Clinton has gone more than 250 days without having a press conference, without answering questions in the media.”

The Clinton campaign has responded to criticism of the Clintons’ global charity by raising questions about Trump’s business dealings. Clinton’s campaign chairman said Trump should release his tax returns so Americans know more about Trump’s “complex network of for-profit businesses.”

The Clinton campaign in Iowa organized a conference call several hours before Pence’s appearance. An Iowa labor leader cited Trump’s bankruptcies and stories from contractors who have sued Trump over unpaid bills.