You are here: Home / News / Iowa native heads into season 3 of ‘Halt and Catch Fire’ 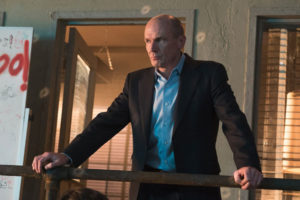 Toby Huss as John Bosworth in the AMC series Halt and Catch Fire.

An Iowa native stars in the television drama “Halt and Catch Fire” which opens its third season tonight  on AMC.

Actor Toby Huss, who grew up in Marshalltown, is in his third year on the program set in the 1980s about the early days of the personal computer industry.

Huss does a lot of acting in comedies, like the reboot of “Ghostbusters” which came out last month, so he says switching to dramatic work like “Halt and Catch Fire” is something of a relief.

“You spend a lot of time when you’re doing comedy improvising, so it’s almost relaxing to go in and have a really good script and all you have to do is remember the lines they told you and then you don’t have to improvise at all,” Huss says, laughing. “Although I do, here and there, on ‘Halt and Catch Fire’ but not very much. It’s a really well-written show. They’re smart folks that run it and write on it.”

Now that the critically-acclaimed show’s third season is about to begin airing, Huss was asked if they have a sense of confidence that the program will continue and be picked up for a fourth season.

“No, we never do,” Huss says. “We thought after the first season, that was all, so we said goodbye to each other thinking we were never going to see each other again and did the same thing after the second season. Third season, we didn’t bother this time. If it comes back, it comes back and it’d be great. It gets pretty low ratings when they air it but a lot of people are watching it on Netflix.”

The first two seasons are now available on Netflix for streaming. With so many channels and programs capturing the attention of viewers, Huss says rare gems like “Halt and Catch Fire” are sometimes overlooked.

“It’s a great show, it’s just hard to get eyeballs on it because there’s no zombies and murder and drug trafficking and killing and rapes and sex stuff,” Huss says. “It’s just a lot of people caring about computers and each other and trying to destroy each other and computers sometimes.” Huss is 49 and has been acting since the 1980s when he left Iowa to pursue his dreams of stardom in Los Angeles. Since then, he’s racked up 114 movies and TV shows on his resume, yet he says he rarely gets recognized on the street.

“Hardly ever,” Huss says. “People usually think I know their friend Kevin or Mike — or Karen, seems to be a common one.” The premiere of “Halt and Catch Fire” is scheduled for tonight at 8 P.M.