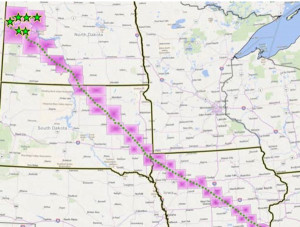 A Polk County judge has denied a request from landowners to stop work on the Bakken pipeline until a lawsuit over the use of eminent domain is settled.

Judge Jeffery Farrell says the 14 landowners must first file a motion with the Iowa Utilities Board to stop the work. He says the court understands the landowners are worried about Dakota Access clearing and trenching their land prior to having a hearing — but says their claim boils down to due process.

Farrell says the Iowa Legislature established a specific protocol that parties can use to request a stay and the landowners cannot skip a step in the process and claim it is justified by an emergency.

The attorney for the group, Bill Hanigan says they are disappointed in the decision to go back to the IUB, but are following the direction of the court. He says they filed the motion with the IUB Monday afternoon.

Hanigan says pipeline construction is moving quickly, and his clients hope to have an immediate decision from the IUB.