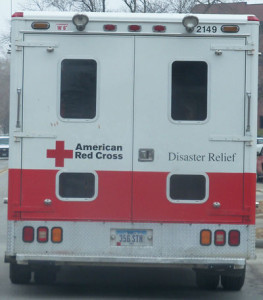 More Red Cross volunteers from Iowa are heading to Louisiana to help with the flood recovery.

“Most of them are working in emergency shelters, there are still thousands of people who cannot go home,” Kelly says. “We have a few people who are driving the emergency response vehicles — going into the neighborhoods making sure that people have food and water and clean up items.” The flooding in Louisiana is called the worst natural disaster to hit the United States since Superstorm Sandy in 2012.

“As you can imagine, it’s a huge mess and there’s just a lot of work to be done yet,” Kelly says. She says people who have never experienced the devastation of flooding may have a hard time understanding its impact.

“In Iowa unfortunately we’ve seen a lot of serious flooding first hand, so perhaps we can be a little bit more understanding of it,” according to Kelly. “In Louisiana they are looking at more than 60-thousand homes that have been damaged or destroyed. Which is significant. We are looking at folks who could be out of their homes for months or even years. And that’s really devastating for people.” The new volunteers who are heading to Louisiana are from Alburnett, Ankeny, Manning, Norwalk, Pleasant Hill, Slater and Vinton. Kelly says Iowa also has some “virtual volunteers” who will help out.

“Some of our volunteers who might not be able to be away from home for two weeks have the ability to virtually deploy — which means they have the ability to work with folks who have been displace via the phone or computers,” Kelly explains. The virtual deployment helps the flood survivors and the Red Cross.

“It’s a way that we can maybe cut back on some costs of sending people down there, if they can just work with people on the phone. And it is still somebody to talk to, still somebody to share their story with and help move them closer to recovery,” Kelly says. Kelly says you can help even if you don’t have the time to be a Red Cross volunteer.

“The Red Cross urgently needs the public to help us support the folks in Louisiana and the easiest way to do so is to make a financial donation. Go to RedCross.org, call 1-800-Red Cross or text the word LAFLOODS to 90999 to make a 10 dollar donation. And those donations enable the Red Cross to help respond and to help recover from disasters,” Kelly says.

She says volunteers typically spend two weeks at a disaster site, but can extend that if they wish. They sometimes will spend two weeks, return back to Iowa for a time and then go back to the disaster area.