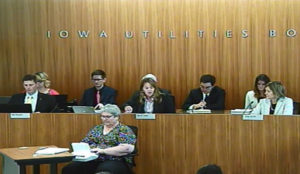 IUB members vote on the request to stop Dakota Access construction on the Bakken pipeline.

The Iowa Utilities Board has unanimously denied a request from landowners for a permanent stay to stop Dakota Access from building the Bakken oil pipeline until a court decides if the company can use eminent domain to get access to their land.

The three-member board heard roughly 45 minutes of testimony from each side and asked several questions before going into a close meeting to deliberate.

After returning to open session, IUB chair Geri Huser of Altoona read a statement that said the board was required to consider four factors: the likelihood of the groups success in their appeal; the degree the group may suffer irreparable harm; the degree to which the other side might be harmed; and the public interest.

“The board has deliberated on the four factors and we have concluded that that balancing test does not support the issuance of a stay. The petitioners have very little likelihood of success on the merits of their appeal,” Huser said. “The possibility of harm to the petitioners if a stay is denied is offset by the harm to Dakota Access and to the others if a stay is granted. And the public interest supports a denial of the stay in order to obtain the benefits that the board found in its March 10th order granting permit,” according to Huser.

The representative from Dakota Access had argued the landowners should have filed the request earlier. Huser’s final point supported that idea. “We recognize that the petitioners might be in a difficult timing situation here, but any apparent emergency that may exist was created by the petitioners’ own actions and their own decisions,” Huser said.

The board did vote to continue a temporary stay on construction in place until the 9 A.M. deadline Monday to give the landowners a chance to file an appeal in district court. Board member Nick Wagoner of Marion voted against keeping the temporary stay in place, while Huser and Libby Jacobs of West Des Moines voted in favor.

The landowners had sought the emergency IUB hearing after a Polk County District Court judge ruled they had to go through the administrative process first before he could take up the issue. Their lawyer has said they will appeal again to district court if the IUB denied their request.