You are here: Home / Crime / Courts / Landowners get hearing today before Utilities Board on Bakken pipeline 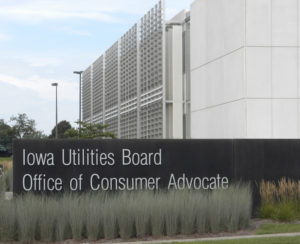 An emergency meeting of the Iowa Utilities Board is scheduled this morning to hear from landowners trying to stop construction of the Bakken oil pipeline.

Des Moines Attorney Bill Hanigan is representing the 15 landowners who want the digging stopped on their properties until a lawsuit on the use of eminent domain is decided. The IUB hearing was requested following an Iowa District Court hearing on Monday.

“This judge, during the hearing and then ultimately in his ruling, said that we should go back to IUB and first get IUB to opine about whether it would order a halt of construction on those 15 farms,” Hanigan says.

The judge ruled Monday that the landowners challenging the Dakota Access pipeline construction have to exhaust all administrative remedies before they can take the case to court. “We certainly did not get the ruling we wanted,” Hanigan says, “which was for an immediate halt to construction on the 15 farms that we represent.” He says if the Iowa Utilities Board doesn’t approve the request to stop construction, then they’ll pursue the next legal option.

The Iowa Utilities Board did order a hold on any pipeline activity on the land involved in the hearing until Monday as the board said there was a possibility that work could advance before the board had a chance to hear the landowners case.

The IUB will hear arguments today at 10 A.M. Dakota Access is building the three-point-eight billion dollars pipeline from the Bakken oil fields in North Dakota through South Dakota and 18 counties in Iowa, ending up in Illinois.