You are here: Home / Crime / Courts / Union: lack of staff led to assaults on officers at Clarinda Correctional Facility 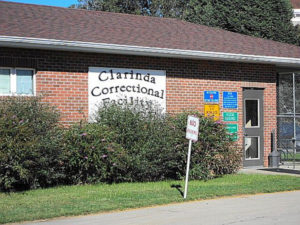 The union representing a majority of workers in the state’s prisons claims understaffing contributed to a pair of recent problems in southwest Iowa.

AFSCME Iowa Council 61 issued a statement saying two correctional officers were physically assaulted by an inmate in a special needs unit at the Clarinda Correctional Facility on Sunday and one of the officers was taken to a hospital.

The union claims the facility in Clarinda is “dangerously understaffed” and eight positions were eliminated there in June. According to AFSCME, a lack of proper staffing contributed to another incident two weeks ago involving two inmates who smoked synthetic marijuana brought in by a visitor.

“On August 21, 2016 there was an assault on two correctional officers at the Clarinda Correctional Facility during a cell search. Both officers received facial injuries. One of the assaulted officers was transported to local hospital for treatment. There are incidents where staff encounter and respond that can result in threats and injury. The Department will continue to attend the needs of the injured officers and commends all responding staff for their prompt and excellent response to protect fellow officers and prevent any further harm. The Department will continue to ensure that Correctional Officers and staff receive proper training to protect themselves and co-workers under these difficult circumstances.”