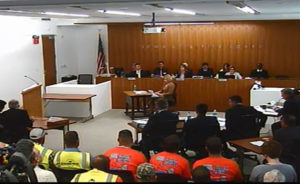 The Iowa Utilities Board listens to arguments on the request to stop construction of the Bakken pipeline.

The Iowa Utilities Board held a hearing that included arguments from both sides today in a request from 15 landowners to stop construction on the Bakken oil pipeline until a court decides if Dakota Access can use eminent domain to get access to their land.

Des Moines Attorney Bill Hanigan represents the landowners and spoke to the board first. “That because Dakota Acess is a private industry — which the board did find in its order — and because it has a private purpose, it is prohibited from exercising the power of eminent domain by the Constitution of this state and the Constitution of the United States,” Hanigan says.

Dakota Access argues the landowners should have raised the issue in April after the IUB turned down a request to reconsider its order giving them a construction permit. Hanigan was asked by a board member why the group didn’t take action earlier.

He says the landowners didn’t take action then because “Dakota Access represented two of the biggest law firms in the state and a host of people from Texas all landed on in a statewide blitz for condemnation.” Hanigan says the IUB has to delay construction until the eminent domain question is decided or they will suffer “irreparable harm.”

“We argue that the lost of our due process rights is in itself an irreparable harm, and we cite good case law for that,” Hanigan says. “And also this board has authority and a responsibility to decide if the landowners are likely to succeed on the merits, once they ultimately get to a full hearing on the merits.” Hanigan says the construction has already been completed on the land of one of the 15. He say they can’t do anything now about the disruption of their land and he says it would be same for the others if pipeline construction moves ahead and then the eminent domain ruling is decided in their favor.

He says if the district court finds that eminent domain was improper and the Iowa Supreme upholds that ruling, then Dakota Access is going to argue under a precedent in a previous case that the landowners only to recover money damages. A Polk County District Court judge told the landowners they had to appeal to the IUB before he could rule on the case. Bret Dublinske represented Dakota Access and says the latest appeal is another attempt to stall.

“And for them to suggest that there was any surprise to this is completely irrational, because almost a full year ago a different judge in Cherokee County told them very clearly when they tried to get around the board proceeding and raised some of these same issues, you have to exhaust your administrative remedies, you have to go to the board first,” Dublinske. He says agreeing to the request to stop construction would harm Dakota Access.

“This is not just a general opportunity to seek reconsideration when the window for reconsideration closed 20 days after the board’s order. That’s what this has turned into,” Dublinske says. “Procedurally everything they’ve done is wrong. They’ve been told that repeatedly, they should be out of options. They cannot continue to get extra bites of the apple. That violates our due process.” Dublinske says the IUB was right in allowing the use of eminent domain.

“What the board did was follow exactly what the legislature told it to do. Do what you need to do figure out whether this project promotes the public convenience and necessity. And then you didn’t make a decision that connects that dot to eminent domain, the legislature has already made that. If they have a problem with that, their recourse is not with this board or even with the district court — their recourse is with the legislature,” according to Dublinske. Dublinske says the landowners know the company cannot operate the pipeline with more than a dozen pieces missing.

“So what is really being asked for here is for this very, very small fraction of people who have been zealous objectors — many of them since the very beginning — who have sat on their rights, to now come in without a bond, without apparently having to really show any like success on the merits, to say we are going to mess up the entire project,” Dublinske says. The three members of the board heard roughly 45 minutes of arguments from each side. They then went into a closed session to deliberate the issue.