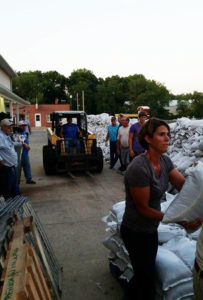 Leaders in Elkader and Clayton County held a news conference today that had good news about the flooding Turkey River.

The National Weather Service reports that the Turkey River at Elkader is cresting today, at just over 22 feet. It should drop to below flood stage of 12 feet by Sunday morning. Earlier predictions had the river cresting at 27 feet, 15 feet over flood stage, which would have created major flooding.

Elkader city officials note that the slow rise of the river gave citizens a chance to put extra sandbags into place; although with the new prediction of a lower crest, the bags may not be needed.

Downstream at Garber, the river is expected to crest tonight at about 24 feet, which is seven feet above flood stage.