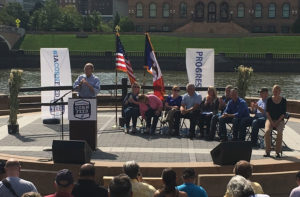 The group “Progress Iowa” held its second annual “Corn Feed” fundraiser in Des Moines this afternoon and Iowa Democrats at the top of the 2016 General Election ticket spoke to the crowd of about 200.

Dave Loebsack of Iowa City — the only Democrat in the state’s congressional election — said there’s a lot on the line this year.

“What happens at the top of the ticket has some effect on the rest of us down ballot, so it is absolutely imperative that we get Hillary Clinton elected president of the United States. I know you’re all going to help us do that,” Loebsack said, to applause.

Loebsack is seeking election to a sixth term in the U.S. House. Monica Vernon, Kim Weaver and Jim Mowrer, the three other Democratic congressional candidates in Iowa, also spoke at the event, staged outdoors on a grassy slope along the Des Moines River.

Patty Judge, the Democrat who is challenging Republican Senator Chuck Grassley, said Grassley is part of “an orchestrated” GOP plan to “try to give Barack Obama a black eye every day.”

“Everybody said to me when I got into this: ‘Have you absolutely lost your mind?…Don’t you know that can’t beat Chuck Grassley? Chuck Grassley wins elections by 30 or 40 points,” Judge said. People in the crowd started to clap and one woman yelled “Fired up and ready to go,” Judge continued: “I’m telling you, we are in single digits right now here in August. We can do this.” 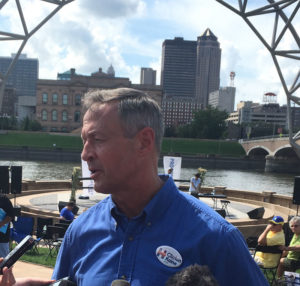 Former Maryland Governor Martin O’Malley was the event’s keynote speaker. O’Malley began with a barb aimed at Terry Branstad, Iowa’s Republican governor, but he spent most of time talking about the race between Donald Trump and Hillary Clinton.

“It’s time to put this racist bully in his place and put a tough woman in her place: the White House,” O’Malley said at the end of his remarks.

Iowa is among the few truly “toss up” states in the General Election, with recent polls showing the presidential race close here. “Early voting” in Iowa starts in a month.