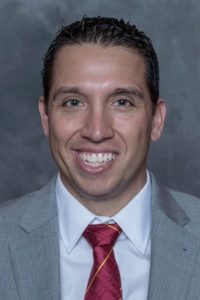 Iowa State coach Matt Campbell says a lot of questions will be answered on Saturday night. Campbell is preparing for his debut as ISU coach when the Cyclones host Northern Iowa in Jack Trice Stadium.

Campbell’s goal is to build a consistent winner out of a program that has not enjoyed a winning season since 2009.

“My expectation is to give back to these great fans”, said Campbell. “They have sacrificed a great deal and I want them to be really proud of what this football program looks like.”

While Campbell is trying to build a culture of winning at Iowa State one already exists at UNI. The Panthers are a perennial FCS power and enter the season ranked fifth in the coaches poll.

Joel Lanning begins his first full season as Iowa State’s starting quarterback and was elected as one of the captains.

“I was very thrilled”, said Lanning. It is awesome to get that honor from your teammates and I will do everything I can to lead this team.”

Mitchell Meyers, Allen Lazard and Kamari Cotton-Moya are the other Cyclone captains.