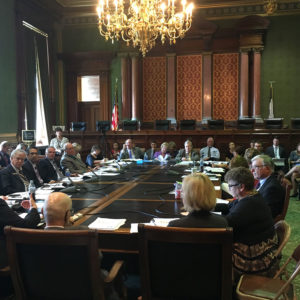 State officials say the three private companies now managing care for the 560,000 Medicaid patients in Iowa saved Iowa taxpayers $22.2 million in April, May and June, but exactly how that savings came about is unclear.

Liz Matney of the Iowa Department of Human Services said there are “pretty wide variances” in how the companies report paid claims.

“We’re investigating as to whether or not that accurately represents the number of claims that they’ve reimbursed or whether we have a data reporting issue,” she told legislators today.

In the department’s quarterly report on Medicaid spending, there’s a “top 10” list of why claims for prescription drugs were denied. UnitedHealthcare’s number one reason was because of an error. The number two reason AmeriHealth hadn’t paid those claims was because the “claim has not been paid.”

Representative Lisa Heddens, a Democrat from Ames, said it makes no sense for the report to label a processed claim as “clean” if the doctor, hospital or other health care provider hadn’t been paid correctly or hadn’t been paid at all.

“I don’t feel like I’ve got an accurate picture here in a number of areas in the report,” Heddens said during this afternoon’s meeting of the legislature’s Health Policy Oversight Committee.

Representative Mary Mascher, a Democrat from Iowa City, said she’s getting nothing but complaints from constituents.

“What I wish is that one day, someone would come to the mic and say: ‘I love the new system. It’s working for me and this is the best thing that’s ever happened to the state of Iowa,'” Mascher said. “I have heard that from no one.”

Kim Foltz is CEO of the UnitedHealthcare Community Plan of Iowa. It’s one of the three managed care companies for Iowa Medicaid patients. She was first to respond to Mascher this afternoon.

“We’re serving approximately 190,000 members today and we actually do have a very large number of positive stories,” Foltz said. “…I would say that we have those positive stories. Those folks don’t come to these sessions.”

Cynthia MacDonald, president of the Amerigroup plan for Iowa Medicaid patients, was also testifying before the legislative committee.

“The depth of the kinds of work and process that we do as managed care organizations is profound,” MacDonald told legislators.

“We have lots of really heart-warming stories and I wish those were the people who came to these meetings to talk to you, but they aren’t,” Harding said, with a laugh.

Last week, Republican Governor Terry Branstad said the companies are preventing “significant” fraud, waste and abuse. State officials told legislators today that there are now four software systems in place to track fraud and data will be available later on how much fraud’s being caught.

The state of Iowa spent $332 million on the Medicaid program during April, May and June. The three companies were fined $4,400 for errors found in claim information submitted in June. Senator David Johnson of Ocheyedan said the Branstad Administration made a “unilateral decision” not to fine the three companies for failing to meet performance standards in April and May.

“What are we going to do to improve communications between the administration and the legislature?” Johnson asked DHS administrators. “Because I think you get about a D+ on that.”

Johnson recently changed his party registration from Republican to “no party” in protest of having Donald Trump as the GOP’s presidential nominee.

Republican Representative Dave Heaton of Mount Pleasant said there had been a “few hiccups” for Medicaid patients and health care providers since April 1st, but he said “the time for partisanship is over.”

“Transitions are hard and we know we’ve encountered some issues,” said Heaton, who is co-chair of the legislature’s Health Policy Oversight Committee.

Two dozen Medicaid patients and Iowa health care providers with complaints about the new system spoke out during a two-hour public hearing this morning at the statehouse.