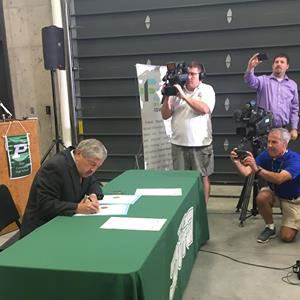 Governor Terry Branstad traveled to Pella today for his weekly news conference where he visited the Career Academy of Pella and signed an executive order creating the Future Ready Iowa Alliance.

Branstad gave the alliance a specific task in pushing for the state’s goal of having education or training beyond high school for 70 percent of graduates by the year 2025.

“To develop and recommend a comprehensive strategy to reach Iowa’s 70 percent goal. The alliance’s report is due October 21st in the year 2017,” Branstad says. About one half of Iowa workers now have the post-secondary training.

Lieutenant Governor Kim Reynolds will chair the group along with Principal Financial Group CEO Dan Houston. “Employers are best positioned to do three key things. And that is to help us identify the high-demand jobs of today and tomorrow. To work more closely with elementary and secondary schools, colleges and universities and training programs — like the apprenticeship programs — to make learning more relevant so that it leads to employment,” Reynolds says.

Houston says the schools provide the supply of workers and they need to know how best to prepare them. “It’s imperative that we on the demand are crystal clear on the skill sets that are necessary,” Houston says. “STEM is important, but so many other skills are important if we are going to drive the economy to the level here in Iowa that we know it is going to take.”

He says they also need to help those who need to upgrade their skills.  “A retooling, a retraining, a redevelopment, a reincarnation of the workforce in Iowa is going to be imperative among our adult students, equally as important to our youngest students,” Houston says. “So I challenge my colleagues to step forward to engage with us in these critical initiatives. Let’s transform these discussions into real action.”

The Lumina Foundation provided a $100,000 grant to fund the initiative, and foundation president Jamie Merisotis was also on hand for the governor’s executive order signing.

“Iowa’s not only doing something smart and morally right with this work, it’s actually doing something quite bold. The reason is that over 95 percent of jobs created during the recession recovery — the period of 2011 until today — have gone to workers with at least some post-secondary education or training,” Merisotis explains. He says the importance of having a properly trained workforce is already evident.

“The vast majority of the wages earned by Americans today are earned by people who have a post-secondary credential. So the alliance has the potential to increase all forms of post-secondary learning in ways that can fundamentally improve the lives of all Iowans,” Merisotis says.

The governor says those interested in being appointed to the Future Ready Iowa Alliance should contact his office.