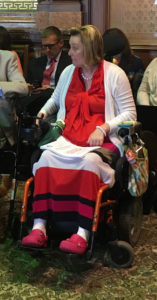 Some of Iowa’s Medicaid patients and the professionals who serve them testified this morning during a two-hour “listening post” at the statehouse, organized by Democratic legislators. Health care providers complained about late payments and confusion in dealing with the three out-of-state companies that began reviewing and either approving or denying all claims April 1.

Medicaid patient Michelle Meadors of Des Moines was the final person to testify. She was in a serious car accident five years ago and now is wheelchair-bound.

Meadors said she was forced to wait six weeks for the catheter tubes she needs.

“Now tell me, with everybody that’s in here complaining and whining…because they’re not being paid, that directly affects someone like me,” Meadors said. “So I don’t care what it takes to get it fixed, but we need to stop and get it fixed.”

In addition to Democrats, one Republican legislator and the legislature’s lone independent attended this morning’s statehouse hearing.

Senator Amanda Ragan, a Democrat from Mason City, said 70 percent of Medicaid spending for disabled Iowans like Meadors and for very poor elderly citizens, many of whom are in Iowa nursing homes.

Derek Laney is the CEO of Iowa Focus, an agency with offices in Council Bluffs and Creston that provides services to Iowans with mental illness or who’ve suffered brain injuries. Laney said he “appreciates” the effort by the managed care organizations to control costs.

“But I also have direct experience with what isn’t working,” Laney says. “…Authorizations must be processed timely…and all the (managed care organizations) must acknowledge the billing and payment problems that exist.”

One business owner with 70 employees said he had to hire another full-time worker just to file claims for Medicaid patients who are being fitted with prosthetics. His company may soon decide to stop serving Medicaid patients because of the hassle with unpaid claims.

A separate legislative committee will convene early this afternoon to quiz officials from the Branstad Administration and the three companies managed the Medicaid program.