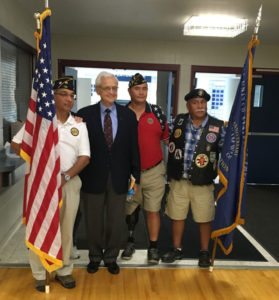 Leonard Boswell with the color guard.

“There’s two things in my public life I’ve never turned down and that is something I can do for children and education or for veterans,” Boswell told reporters. “So I asked David: ‘What kind of event are you having?’ He told me. And I said: ‘Have you done it before?’ And he said: ‘Well, yeah, I had it last year, about the same time.’ And I said: ‘If I can be of any help to the veterans, count me in.'”

Boswell, who will be 83 in January, participated in a midday ceremony to mark the 50th anniversary of the Vietnam War.

“We went through a time historically. It was pretty sad, really, because of the attitude or the ‘non-welcome-home’ type thing and this attitude has changed,” Boswell said. “…It needed to change and so I’m very happy about that.”

Boswell was drafted into the U.S. Army in 1956 and he was an assault helicopter pilot in the Vietnam War. Boswell rarely tells the story of the mission he flew to rescue a pilot who had ejected from an airplane when it was shot down. Radio Iowa asked him about it today. 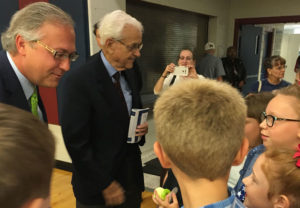 “I was executive assistant to the most decorated naval officer of WWII in NATO…We got to talking about some of the things he did and he said, ‘You know, there’s about that much difference between being a hero and a damn fool,'” Boswell said, holding his index finger within a quarter of an inch from his thumb to illustrate his point. “And you know, I came pretty close to being a damn fool because we didn’t have any survival gear on that helicopter or anything, but we got him. That was the main thing.”

Boswell told the story in detail about two decades ago at a Veterans Day event. Boswell described the waves that were washing through the helicopter’s open doors as his crew fished the pilot out of the ocean.

“He had his arm broken and he was going to drown,” Boswell explained today.

Boswell said he and his crew flew that rescue mission because the wounded pilot was at the end of his tour of duty in Vietnam — and scheduled to fly home the next day.

Boswell served 20 years in the military, retiring at the rank of lieutenant colonel. Among his many awards are two Bronze Stars and two Distinguished Flying Crosses. Boswell presided over the awarding of “Vietnam Veteran Lapel Pins” at today’s ceremony.

Earlier this morning, the Veterans Administration and nearly two dozen veterans service organizations held a workshop for central Iowa veterans, to review their benefits. The event was held in the gym on the now-closed AIB campus that was turned over to the University of Iowa.