You are here: Home / News / Libertarian Gary Johnson to campaign here this weekend 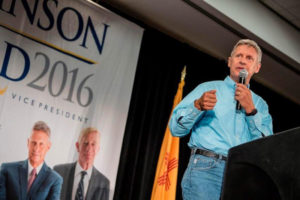 Johnson was a Republican when he ran for governor of New Mexico in 1994. He won two terms there and left office in January of 2003. Johnson ran for president as a Republican in 2011 and made a campaign stop here before the Caucuses, but Johnson wound up switching parties and securing the Libertarian Party’s presidential nomination in 2012.

He’s the Libertarian Party’s nominee again this year. According to Johnson’s campaign website, the candidate’s “Iowa Rally” will be held in Des Moines, at the Grand View University Wellness Center on Saturday afternoon.

The latest Quinnipiac University Poll in Iowa was released in mid-August. It found Johnson had the support of 12 percent of the likely Iowa voters who were surveyed.