Thirty protesters in Boone who tried to block access to construction equipment for the Bakken oil pipeline were arrested this afternoon. More than 100 other activists gathered to witness the arrests and show their support. Adam Mason of Iowa Citizens for Community Improvement was a protest organizer.

“The fact that there’s folks here from Canada, from New York, from Nebraska shows that pipelines like this impact not just us here in Iowa, not just the folks in North Dakota. This has global implications,” Mason told Radio Iowa. “Folks realize that and across the country are standing up to say: ‘No more pipelines.'”

Carolyn Raffensperger of Ames provided free legal advice to the protesters who were arrested.

“My commitment as a lawyer is to defend the right of future generations to inherit clean drinking water, a healthy climate, clean soils,” Raffensperger said.

Raffensperger just returned from North Dakota, where protesters have joined members of the Standing Rock Sioux to try to block construction of the pipeline on tribal lands.

Frank Cordaro, a peace activist from Des Moines, conducted a training session for the Iowa protesters this morning in nearby Pilot Mound.

“We’ll say a lot of words, but what’s really going on here is it’s a gut thing for these folks here to say: ‘We know how to step up our game,'” said Cordaro, who has been arrested many times for civil disobedience at federal facilities and he’s been sentenced to serve several months in prison on at least eight different occasions.

The protesters arrested in Boone are being charged with misdemeanor trespassing. 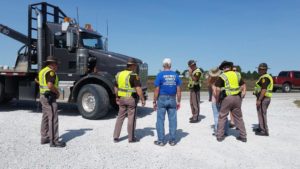