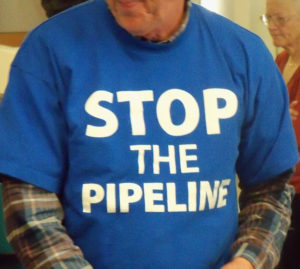 Protests of the Bakken oil pipeline will go on as planned this afternoon in central Iowa after a request for a restraining order to keep demonstrators away was rejected.

A federal judge said on Tuesday that Dakota Access didn’t prove an immediate risk of injury or damage by protesters. Ed Fallon, director of the group Bold Iowa, says he supports nonviolent demonstrations and civil disobedience.

“I was a state lawmaker for 14 years and I’ve been a lifelong advocate of the approach to social change that Martin Luther King used,” Fallon says. “For them to be implying that we somehow are inclined to violence and need to have restraining orders put against us, that’s just crazy.” 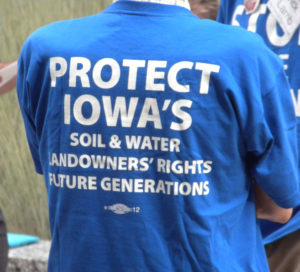 The back of a pipeline protestor’s shirt.

On Monday, Dakota Access sought an immediate restraining order to keep protesters at least 25 feet from its worksites. Fallon says Bold Iowa is committed to peaceful protests in blocking construction of the pipeline.

“We’ve been very meticulous about making sure we respect the officers, that we respect the workers,” Fallon says. “Our concern is that here’s a pipeline company from Texas, owned by one of the wealthiest Americans, that has come in and basically illegally used our eminent domain law to classify itself as a public utility. It is not a public utility.” Fallon says the pipeline company is making outlandish allegations in order to stop peaceful protesters, trying to tie him with acts of arson a few weeks ago that destroyed a million dollars worth of pipeline equipment.

“We’re having an effect,” he says. “The pipeline company is resorting to rather desperate tactics, including here in Iowa, getting the governor to agree to call out the state patrol.” Governor Terry Branstad was Monday if the Iowa State Patrol would be available to react to the protest. He replied: “Of course, the Iowa Highway Patrol protects the safety and well-being of Iowans, whether it is at the State Fair or on the highways or wherever it might be, so I have full confidence in the Highway Patrol.”

Fallon says up to 100 protesters plan peaceful civil disobedience this afternoon at a pipeline worksite in Boone County. More than 1,100 people have signed the Bakken Pipeline Pledge of Resistance organized by Bold Iowa and its partners, Iowa Citizens for Community Improvement and CREDO action. The pipeline is planned to cut across 18 Iowa counties.