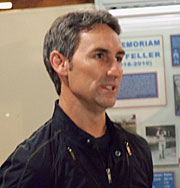 The State Historical Museum in Des Moines is taking its show on the road. Museum spokesperson Jeff Morgan says an exhibit called “Iowa History 101” will be touring the state.

“It’s going to be housed in a 38 foot long Winnebago RV that’s going to visit all 99 Iowa counties beginning next spring,” Morgan says. The traveling exhibit will feature artifacts and history showcasing the entire state.

Morgan identified a couple of the items. “A 1917 prototype of Iowa’s state flag that was designed by Dixie Cornell Gebhardt of Knoxville,” Morgan said. 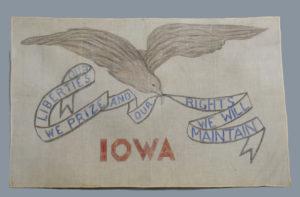 Another feature will be a 1928 record of the song “Sugar” featuring jazz musician and Davenport-native Bix Beiderbecke .

Mike Wolfe, star of the television show “American Pickers,” took part in an event Tuesday to announce the new exhibit at Antique Archaeology in Le Claire.

“Mike Wolfe is our exhibit partner and will be providing the voice and video talent for the multimedia components of the exhibit,” Morgan said. The Iowa Historical Museum RV will start touring in the spring and admission will be free.