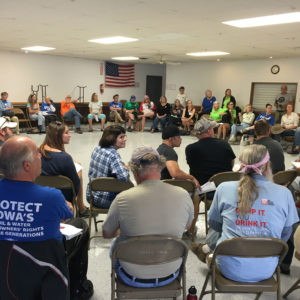 Protesters getting training in Pilot Mound

More than 80 people gathered in a small town’s community center this morning, preparing to be arrested this afternoon as they protest construction of a crude oil pipeline.

Carolyn Raffensperger of Ames drove by the construction zone on her way to the meeting in Pilot Mound, a small town in Boone County that’s near the Dakota Access route.

“There are many piece of equipment,” Raffensperger said this morning. “They’re digging the trench right now. It’s obscene.”

Raffensperger was in North Dakota for the past couple of weeks to provide legal assistanse to pipeline protesters there. She won’t be among those who plan to commit “civil disobedience” today and risk arrest, but will instead provide legal help for those who may be arrested.

Adam Mason is with Iowa Citizens for Community Improvement, one of the organizers of the planned protest.

“Just the turnout that we’ve seen this morning is a sign that Iowans and people all across the Midwest are continuing to rise up against the pipeline,” Mason said. 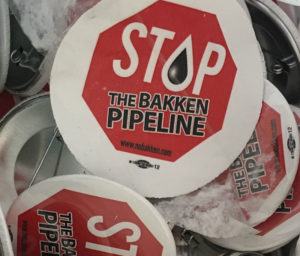 The group arranged their chairs in a circle shortly after nine o’clock this morning and underwent training in how to stage a “non-violent” protest. Ed Fallon is the founder of Bold Iowa, another group involved in today’s event and he said only those who’ve gone through the training will be allowed to be part of the protest.

“With some people trying to accuse us of being involved with the arson or inclined to violence, we want to make it really clear that all of us involved in this are really not only committed to the ideas of non-violence, peaceful protest, but we’ve gone through the steps to make sure that we understand them,” Fallon said.

Mason noted a few of the protesters came from as far away as Canada and upstate New York as well as the neighboring states of Minnesota, Wisconsin and Nebraska

“Our goals today are to take a strong stand — a principled, non-violent, peaceful stand against this pipeline and to bring more eyes to what’s going on here in Iowa,” Mason said.

Jan Wann of Mason City was among the first to arrive in Pilot Mound this morning.

“It’s closer than North Dakota. I was thinking of going up there and I thought: ‘You know, I would probably just get in the way up there,'” Wann said. “Down here there was training in civil disobedience, which is something I’m interested in. I want to stop the pipeline.”

Nick Schutt Alden said he’s protesting to send a message to Governor Branstad and other state officials who did nothing to stop the project.

“For people to take ground through eminent domain for private profit and to destroy our environment the way it is — I see rows and rows of trees out there flat, piled up — for private profit, that’s not right,” he said.

Jeff Milks of Oelwein said he’s in Boone County to take a stand “against big oil and for the environment.”

“We are here to help out in any way we can,” Milks said. “We’re from northeast Iowa and we feel pretty strongly about this stuff.”

A few years ago Milks participated in protests against proposed coal-fired power plants in Elk Run Heights and Marshalltown.

“At some point, people have to start caring about this, so you’ve just go to get up and do it, so that’s what we’re doing,” Milks said. “It’s going to take a lot of little people to stand up against the fossil fuel industry and it’s time. It’s past time, really.”

“It just places Iowa’s water at greater risk and the very fact that you can use eminent domain for a private company’s profit — no. That’s wrong. It’s just wrong on so many levels,” Sand said soon after she arrived in Pilot Mound. “That’s why I’m here.”

Cindy Coppola is from Des Moines, but the pipeline route crosses farmland owned by her family in Calhoun County.

“Environmentally, this is a disaster and to use some of the best farmland in the world and to put a hazardous crude oil pipeline underneath is distressing,” Coppola said.

A spokesperson for Dakota Access was not immediately available for comment. The company’s website says the pipeline will ship “domestically produced light sweet crude oil from North Dakota to reach major refining markets in a more direct, cost-effective, safer and environmentally responsible manner. The pipeline will also reduce the current use of rail and truck transportation to move Bakken crude oil to major U.S. markets to support domestic demand.”