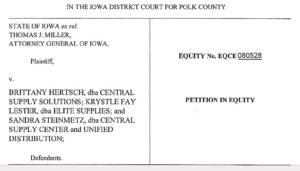 The Attorney General has filed a lawsuit against companies who are allegedly trying to scam money from libraries for copier toner.

The Iowa Attorney General’s office has filed a consumer fraud lawsuit against three California companies, claiming they sent libraries in Iowa bills with inflated prices of photocopier toner, though the supply was never ordered.

It began with Cate St. Clair, director the Robey Memorial Library in Waukon. After the library received a mysterious bill for about $400 for toner, St. Clair called the number printed on the invoice.

“They were very surly on the phone and it was a California number,” St. Clair said. “They were like, ‘just disregard it. Just disregard it.’ And I was like, ‘Well this is super sketchy.'” At least 14 other Iowa libraries have received similar bills this year. Iowa Attorney General’s office spokesperson Geoff Greenwood alleges the scheme starts with a phone call and someone inquiring about the brand and model number of the office photocopier.

“And then they will get back to you with an invoice that has toner in it, very high-priced toner,” Greenwood said. “And they’ve got the brand name and the model number of your copier and the person who orders the toner. Well, someone else may receive this invoice and think, ‘well the other person in the office must have ordered it and I need to pay this invoice.'”

The companies named in the lawsuit are Central Supply Solutions, Central Supply Center, and Elite Supplies. Greenwood said it’s unclear why so many of Iowa’s public libraries are being targeted by the scam this year.