You are here: Home / News / Libertarian Johnson says polarization will be ‘worse than ever’ if Trump or Clinton win 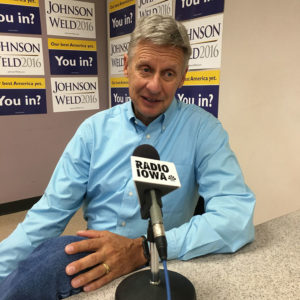 Libertarian presidential candidate Gary Johnson held his first rally in Iowa this afternoon, promising to be “the voice of reason” as the country’s chief executive.

Johnson served two terms as governor of New Mexico. Johnson defeated the mayor of Albuquerque to win his second race — after debating his opponent 28 times. Johnson says if he does get on the debate stage with Hillary Clinton and Donald Trump, he’ll employ the same strategy he used in New Mexico.

“That I’d be talking about issues as opposed to throwing rocks,” Johnson says. “That isn’t anything new. Having never been involved in politics before, I didn’t throw any rocks. I didn’t mention my opponent in print, radio or television the two times that I ran for governor.”

However, Johnson is saying the names of the two major party presidential candidates in 2016.

Johnson was a Republican when he served as governor, but Johnson says he “got the boot” from the Republican Party because he was “socially inclusive.” He ran as the Libertarian Party’s 2012 presidential nominee, getting about a million votes. A recent national poll suggested Johnson’s 2016 candidacy is gaining more traction.

“Doing the math on 12 percent, that’s 16 million voters. That’s a significant chunk of the voting age population, so I think it only has one direction to go and that’s up because the more people that do recognize who we are and what we’ve done, it’s a good thing,” Johnson says. “We’re the voice of reason.”

More than 400 people gathered on Grand View University’s campus early this afternoon to hear Johnson speak. The sound system crashed briefly and while Johnson waited for it to be fixed, the crowd chanted: “Let Gary debate.” The crowd cheered about 10 minutes later when Johnson called for legalizing marijuana.

During his speech, Johnson said it was time for term limits for members of congress and told the crowd the best way to get “pink slips for lobbyists” in Washington, D.C. would be to get rid of the federal income tax and corporate tax and replace it with a national sales tax.

Johnson closed by offering the crowd a “comeback” to people who suggest a vote for the Johnson-Weld ticket is a “wasted” vote.

“Wasting your vote is voting for somebody you don’t believe in,” Johnson said, as the crowd cheered.