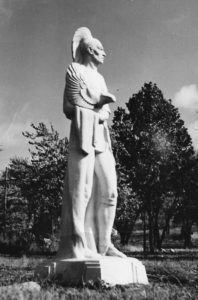 An 82-year-old statue that’s on the National Registry of Historic Places will be rededicated today in the northwest Iowa town of Lake View. The nine-foot-high statue is of Chief Black Hawk, who headed the Sauk tribe which roamed the area in the 1830s.

Lois Long, with the Lake View Historic Preservation Commission, says the Lake View Commercial Club unveiled the statue on Labor Day in 1934. “They commissioned Harry E. Stinson, who at the time was at the University of Iowa and was working with the CWA program under the direction of Grant Wood,” Long said. “(The statue) was funded with money from the Roosevelt administration.”

The statue was badly damaged before it was restored in 1999 and placed on the National Registry of Historic Places one year later. “Over the years, there’s been wear and tear on the statue. His nose was almost worn off and in his arm he carried a hawk, but we unfortunately have vandals around and the hawk’s head was broken off,” Long said.