You are here: Home / News / Clinton, in Quad Cities, promises campaign of issues, not insults (AUDIO) 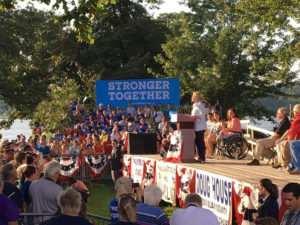 Hillary Clinton in the Quad Cities.

Democratic nominee Hillary Clinton is promising to “say no” to anti-union proposals if she’s elected president and that includes rejecting a “Right to Work” law at the national level.

“Unions not only raise incomes and provide benefits for union members, but because of unions everybody is better off,” Clinton said late this afternoon, to applause. “And that’s a message I’m going to talk about every single day in this campaign.”

Clinton was the closing speaker at the annual Labor Day “Salute to Labor” in the Quad Cities. She touted the 256-page policy book she and her running mate Tim Kaine are released tomorrow.

“I’ll tell you why we did this book,” Clinton said. “I think if you run for president, you ought to tell people what you want to do. Right? And what I’ve tried to do in this book…is to lay out a blueprint for America’s future.”

The book’s title is “Stronger Together.” That was the theme of the Democratic National Convention in July and is the name of Clinton’s official campaign plane which took its first flight today. Several times during her speech in the Quad Cities, Clinton stressed the need to unify the country.

“We’re going to run a campaign of issues, not insults,” Clinton said, to applause.

Clinton made a brief pitch on behalf of Iowa Democrats who’re on the General Election ballot and offered a list of proposals she’d advance as president, like raising the national minimum wage. She also drew cheers by promising to reject “unfair trade deals” and she specifically lumped the Trans Pacific Partnership in that mix.

“I hope you will get involved in this campaign for these last two months,” Clinton said. “…We need everybody involved. There has never been a more important, consequential election in our lifetimes.”

Clinton spoke with reporters on her campaign plane as she flew into the Quad Cities. Clinton answered questions about how she handled email during her tenure as secretary of state. Clinton also raised concerns about Russian cyber attacks that might interfere with the U.S. election.

A spokeswoman for the Republican National Committee called Clinton “dishonest” and accused Clinton of the “reckless mishandling of classified information” with the email set-up she used as secretary of state.