You are here: Home / Agriculture / Many challenges ahead for Iowa dairy industry 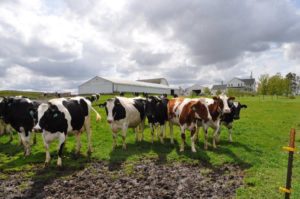 Iowa ranks among the top 12 states for milk and cheese production, but the state’s dairy industry often misses out on the spotlight due to Iowa’s role as a national leader in corn, soybean, beef, and pork production.

Sue Ann Claudon, executive director of the Iowa Dairy Association, says there are currently around 1,260 dairy farms in Iowa — with each farm having anywhere between 50 and 5,000 cows. She’d like to see those numbers grow. “We have a lot of dairy farmers in other states who would love to come to Iowa because we are a dairy friendly state,” Claudon says. “We have the feed stuff available and we have the resources — we have the businesses who serve the dairy (producers) already here.”

California and Wisconsin are the top two milk producing states. Claudon says Iowa needs to expand its processing capacity before the state can significantly boost its production. “We are working with the state and looking at how we can expand that processing capacity and compete against the other states, especially Wisconsin and South Dakota,” Claudon said. “One of the challenges with that, though, is those two states give incentives to businesses to come into their state.”

The dairy industry is struggling in Iowa and across the country as dairy prices have gone down about 35 percent in the last two years. The USDA announced in late August it would help out farmers by buying 11 million pounds of cheese out of private inventories. The cheese will be donated to food banks and pantries.