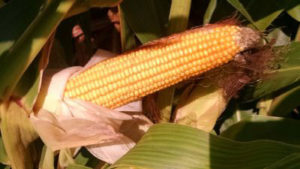 Todd Claussen, director of agronomy with Landus Cooperative in Ames, says he’s seeing a lot of variability from field to field. “I get that every day — ‘Boy, the crop looks great’ — and yes, it does look good at 60 miles per hour,” Claussen said. “But when you get out in it, don’t get me wrong, it’s not bad, there’s no catastrophe here — but we’re quite variable,” Claussen said. Reduced stands are an issue in some fields, according to Claussen.

“We got into some heat there in July, when things were really going there, pollinating,” Carstens says. “Some of the tip-back I’m seeing, it’s on ears that probably would have been 45 kernels long and they went back to 34 or 35.” The term “tip-back” means the kernels don’t fill all the way out to the end of the ear. Still, Carstens expects “a really good” corn crop.

You never really know until you get the combine in the field and start weighing stuff up, but I think we’ll have a decent fall,” Carstens said. The USDA crop report issued on August 12 estimated the 2016 total U.S. corn production at an all-time record level of 15.15 billion bushels. The projection, if accurate, would best the previous record U.S. corn production of 14.2 billion bushels in 2014.