You are here: Home / Health / Medicine / Iowa moves up obesity rankings, but statistically about the same 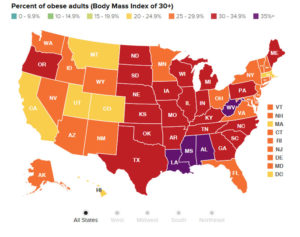 While a new report says Iowa moved from 16th to 12th place among the nation’s most obese states, the rankings may not be as bad as they sound.

Giridhar Mallya, senior policy officer at the Robert Wood Johnson Foundation, says the percentage of Iowans who are considered obese grew just slightly over the past two years.

“Overall, between 2014 and 2015, we didn’t see a significant change,” Mallya says. “The reason that’s important is because the vast majority of states have not seen a change in the prior year or in the past several years. That’s one of the key, promising findings from this report.”

The report says obesity remains an epidemic nationwide and finds the treatment of consequences from obesity costs Americans $150 billion a year. Still, the study, called “The State of Obesity,” also found some reason for optimism.

“The plauteauing that we’ve seen in adult obesity seems to have been maintained across most of the states in the country,” Mallya says, “and in four of them, we’re actually seeing declines.” Those four states are: Minnesota, Montana, New York and Ohio. The report found the highest rates of obesity in Louisiana and the lowest levels in Colorado. The report found the percentage of Iowans who are considered obese rose from 30.9 percent to 32.1 percent.

“These surveys aren’t accurate down to the tenth of a percentage point,” Mallya says. “That change that we see from 2014 to 2015 isn’t really a change statistically. Generally, over the last several years, the rates have been stable.” He says obesity elevates the risk for a host of illnesses, ranging from diabetes and heart disease to kidney failure and stroke.