You are here: Home / News / Many Iowa schools are not teaching Iowa history 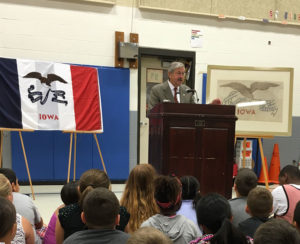 Governor Terry Branstad this morning released recommendations from an “advisory council” studying how Iowa history is being taught in the state’s elementary schools.

Fifty-three percent of educators surveyed are not including Iowa history in social studies classes, although it is required by state law.

According to Branstad, new social studies standards being released this fall will incorporate the requirement.

“I think that goes a long ways to signalling to teachers in the schools that this is something that’s expected,” Branstad said this morning. “It’s near and dear to my heart and I’d just say I want to do all I can to encourage and support it because I think it’s made a real difference in my life and I think in the lives of many other people.”

Stephanie Wager of the Iowa Department of Education said a quarter of the educators surveyed weren’t offered an Iowa history class when they were elementary students.

“This Iowa history problem is not just one for those who care passionately about the subject. It is a problem for all Iowans. Knowing about your community and your state helps make you a better citizen in your community,” Wager said. “Preparing students to be good citizens is the original purpose of public education.”

Branstad staged his news conference on this topic in a Des Moines elementary school and he gave a three-minute lesson on the history of the state flag.

“Iowans have always been kind of modest people,” Branstad said as he concluded the lesson. “We don’t brag a lot, but we do have a proud history and heritage and we want to preserve so that future generations will know the wonderful things that Iowans have done throughout our history.” 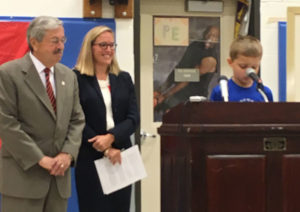 “History is such an interesting topic and wouldn’t you feel bad if your children didn’t know about this great state of Iowa?” Bucklin asked as he stood on a box behind the lectern so he could speak into the microphone. “…All I’m saying is the world could be changed by teaching history.”

Branstad told Bucklin he made an “Iowa History notebook” when he was in junior high. Branstad’s scrapbook is in a museum in Forest City.