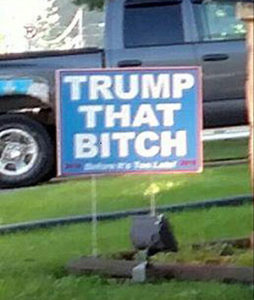 A political yard sign placed outside a home in Atlantic is drawing complaints about vulgarity. The sign reads: “Trump That Bitch, Before It’s Too Late.”

Atlantic city administrator John Lund says there’s nothing in the zoning ordinance that allows the city to call for the removal of such a sign, but there are restrictions on when such signs can be placed in public view.

“It’s not supposed to be allowed in the city limits 60 days prior to the election or 10 days after, so, he would need to take it down but it could go back up on Saturday,” Lund says. “We don’t have anything that can actually control the nature of the language or even the imagery. We’re working on something like that.” Lund says common sense should prevail with regard to the language.

“People just need to have a little decency and standards and think about what they’re putting up there,” he says. In October, the code will be changed to state: “Indecent/vulgar images or offensive language are not permitted on signage within city limits.” He says the city is taking complaint calls about the sign.

“I know the chamber has and I’ve had two others since last night,” Lund says. He plans to talk with the homeowner directly and ask that the sign be removed. Lund calls it “not family friendly.” He says Election Day — November 8th can’t come soon enough.

“It’s a hyper-partisan situation right now,” he says. “I’ll be glad when the election is over. I think everyone will be.”

Dawn Williams, Director of Elections at the Iowa Secretary of State’s Office says: “There is not a law that specifies how early or late campaign signs can be displayed. There were restrictions years ago but a court ruling that cited the First Amendment removed them.”