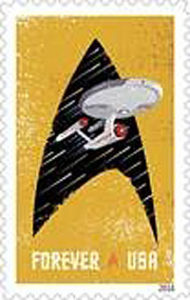 One of 4 Star Trek stamps.

CBS held the first day release of the stamps in New York on September 2nd because they hold the rights to the show.

But Riverside Postmaster Debra Steffen says as the city has fully embraced its designation as the future birthplace of Captain Kirk, the lead character in the first series.

She says they have a monument made for the future birthplace and even have Murphy’s Bar, where Kirk was allegedly conceived.  Steffen says the stamps feature the various colors of the uniforms of the crew of the Starship Enterprise, along with images from the show.

“The gold one is the starship, the Enterprise, the red stamp is someone being beamed up. The green stamp is the top view of the ship, and then the blue stamp is Spock’s hand signal,” Steffen explains. First officer Spock would give the hand signal and deliver his signature line: “Live Long and Prosper.”

You can already buy the stamps at the post office, and they will be sold at Saturday’s event. She says the stamps are sold in a sheet of 20 for $9.40, and they have to be sold together. They will also feature the stamps on 24-by-40 marquee signs.

But one thing you can’t get anywhere else is a special Riverside postmark. That postmark features the top view of the Enterprise. “And it says Star Trek in the middle and it says Riverside station in the middle and the date that our dedication is going to be — September 10th,” according to Steffen. She says collectors are already asking for the postmarked stamp.

“We’ve already gotten five letters from people wanting the advanced postmark on it,” Steffen says.  You can get your own Riverside postmarked Star Trek Stamp. “Mail me a self-addressed stamped envelope,” Steffen says, “and they just kind of write down where they want the stamp canceled…and then they have to have it self-addressed so I can send it back to them.

Steffen says post office employee and former councilmember Steve Miller came up with the idea that Riverside is the birthplace of Captain Kirk. Since then there’s been lots of Trekkies visiting.

Steffen says they come form all over the world, Antarctica, Australians, Germany and “everywhere.” Steffen says there are a lot of fans out there and the stamps are expected to outdue the record sales of a 29-cent stamp issued for the King of Rock and Roll, Elvis Presley.

The event Saturday begins at 9 a.m. at the Riverside Post office.