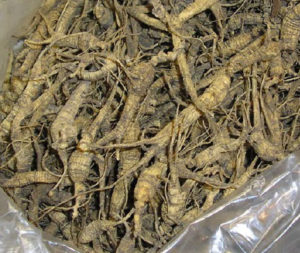 Officer Matt Bruner says 53-year-old Bart Bollie of Madrid, 55-year-old Kyle Jones and 28-year-old Brent Jones, both of Slater were each charged. “They were licensed to harvest ginseng — the issues that arose were the harvesting of it and simply taking it from state lands. That is prohibited, and also taking ginseng roots that were too young to be harvested,” Bruner says.

The DNR is asking for restitution and liquidated damages equal to 150 percent of the value of the ginseng the men dug up — which is $292 for each man. Bruner says there are some specific regulations to ensure ginseng is not overharvested.

He says the plant has to have three prongs or stems above ground and the harvester has to inspect the root and make sure it has at least five stem stars so that it is five years old. Ginseng is a slow-growing plant and its root is used in herbal products, supplements and teas in Asian cultures and health food stores.

Some of the roots harvested in Iowa do go to San Francisco. “Most of them are being sold over to Asia, last year bringing 500 to 600 dollars-a-pound. Sometimes  700 to 800 dollars-a-pound for a dried ginseng root,” Bruner says. He says the high price you can get from the roots makes some people try to take it illegally.

“Clearly the temptation is out there because folks can make money off of it,” according to Bruner. “We run into folks every year — whether they are taking from lands they are not supposed to, maybe they are  not licensed — or  taking it at the wrong times of the year.”

Bruner says it’s not expensive to pay to legally harvest the roots. He says the ginseng harvester license costs about $37 dollars and there around 150  people across the state buy licenses.  The prized root can be found in several areas of Iowa.

“It grows best in the old growth forest, so along mature river valleys.  Of course northeast Iowa, eastern Iowa especially has a lot of high-value areas, old growth areas that have good numbers of ginseng,” Bruner explains. Bollie, Jones and Jones are set to appear in Dallas County court on September 12th.

Ginseng may be harvested in Iowa from September 1st to October 31st from private land with permission from the landowner. Iowa is one of 19 states that allow ginseng to be harvested.