You are here: Home / Sports / Stakes are high as district play begins 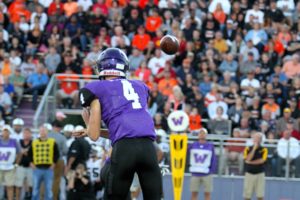 The stakes are raised in high school football as district play begins and two of the teams expected to contend in 3A District-7 collide as eighth ranked Carroll visits number 10 Glenwood. With the playoff field cut in half this year and only two teams from each district guaranteed a playoff spot there is little margin for error.

“This is one of the reasons I was in favor of four teams getting in”, said Glenwood coach Cory Faust. “You are looking at a district that I think has at least four teams that are top ten worthy. It is a challenge but at the same time it makes it a lot of fun and challenges bring out the best in us.”

Class 3A seventh ranked Sergeant Bluff-Luton opens the District-1 race on the road at Sioux City Heelan and Warriors’ coach Justin Smith says some good teams will be left out of the playoffs in a crowded district race.

“I think everybody in this district is better than they were last year”, said Smith. “There is not an off week in our district.”

If you are searching for the strongest district in the state you need to look no further than class 2A District-4. Half of the teams ranked in the latest Radio Iowa Poll reside in the district, including top ranked North Fayette Valley. The Tiger Hawks open the district race with a visit to 10th rated Cascade.

“I told my kids the playoffs really start this week because as of today there are five teams in our district that are ranked in the top ten and only two of them are going to get an automatic berth”, said North Fayette Valley coach Bob Lape. “You have got to be ready to play every week.”