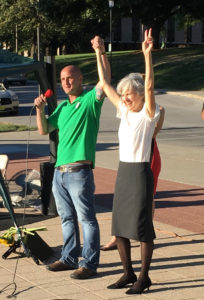 “Think about joining us, to stand up and put our bodies on the line in this election where are deciding whether or not we will have a world to be here in the future,” Stein said.

Stein was the Green Party’s presidential nominee in 2012. She and her running mate got arrested four years ago when they tried to enter the site of the second debate between Barack Obama and Mitt Romney. Stein’s going to attempt the same thing next week, but she told reporters she is aiming to get “hundreds” of supporters to join her in risking arrest. 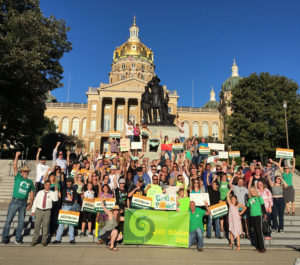 “Think about reserving the date, getting a bus, coming out and making this the beginning of the day that we take back the promise of our democracy,” Stein said to the crowd today.

Stein joined oil pipeline protesters in North Dakota last week. Stein will return there at some point to face misdemeanor charges for spray painting construction equipment. Today, Stein spoke for about 30 minutes and did not directly mention the 15th anniversary of 9/11, but she did say the U.S. had “planted the seeds of al Qaeda.”

“We created this great idea of international jihad in order to stop the Soviet Union in Afghanistan, so Osama bin Laden was one of the many people who actually got trained by us…It’s all been downhill from there,” Stein said. “…ISIS came from the chaos of Iraq and of Libya…We got this stuff going. We have the power to shut it down with a peace offensive.”

Today’s event was organized by Chris Laursen of Ottumwa, one of the Bernie Sanders delegates at the Democratic National Convention. Laursen told the crowd Sanders had sounded the wake-up call for the movement.

“But to endorse Hillary Clinton…to actively campaign for Hillary Clinton is not being a revolution. It’s revolting,” Laursen said in brief remarks before introducing Stein. “We do have somebody carrying on that spirit and that is in Dr. Jill Stein and that is exactly why I came to the Green Party.”

Jesica Butler of Hawarden, another Iowa Democratic Party delegate who supported Sanders at the national convention in July, is a Stein supporter now.

Launie Sorem of Boone was a delegate to the Iowa Democratic Party’s state conventions in 2004 and 2008, but she’s a Stein supporter now.

“Those who are unconscious — wake up before it’s too late because we’re responsible for our children’s future,” she said.

Nate Rauh of Des Moines was a Sanders supporter in the 2016 Iowa Caucuses. He attended Stein’s rally Sunday, but “strategically” is worried about voting for a third-party candidate.

“Just because Iowa’s a swing state, I don’t know if I really kind of want it to swing Republican,” Rauh said.

Stein made a pointed pitch to the Sanders supporters and mentioned the “Berning-Green” movement when she spoke to local reporters afterwards. Stein called Hillary Clinton and Donald Trump “war mongers” and “corporate predators.”

“The lesser evil and the greater evil are in a race to the bottom,” Stein said during remarks to the crowd, drawing cheers, applause and the bugle-like toot of the conch shell a man in the crowd sounded frequently during today’s event.