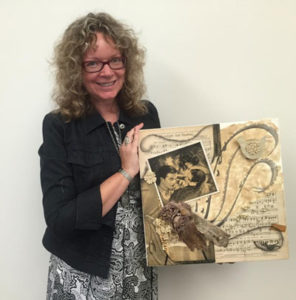 A new exhibit opened over the weekend at the Figge Art Museum in Davenport that features only works from cancer survivors.

It’s called, “The Living Proof Exhibit,” and the project was co-founded by Pamela Crouch in 2010 as she battled cancer.

Crouch says the collection includes more than 60 pieces of art. Crouch says, “Everything from fiber arts, which include sewing and knitting and a quilt, to painting to encaustics and photography and to the more traditional forms of art.”

What sets the show apart from other displays is how the work has helped these artists through some dark days. Crouch recalls sitting at home, feeling sorry for herself, bald and full of steroids when she decided to make a change. She bought some birdhouses, painted their roofs pink, added flowers and butterflies, and gave them away as gifts to friends and fellow cancer survivors. 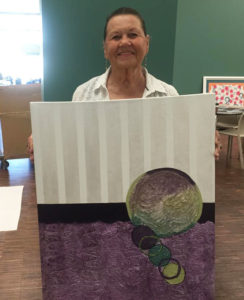 “Cancer strips away so much of what you know about yourself,” Crouch says. “By being able to have a little opportunity to create, to build something, when cancer takes so much away, to build something is very meaningful and very powerful.”

Art became Crouch’s healing therapy. She expanded into photography and mixed-media collages and found many other cancer patients seeking creative ways to aid recovery. One of them is Sue Lemmon, a 10-year cancer survivor who’s taken up abstract painting.

“It occupies your mind so you don’t have to think about troubles in the world, about pain, whether it’s arthritic pain, cancer pain, depression,” Lemmon says. “Your mind is caught up in the creative process.” Lemmon says art has allowed her to get her mind off cancer and onto more pleasant things.

The Figge also hosted the Living Proof Exhibit in 2014 and it was a big hit with the public. It will be on display through October 16th. http://www.livingproofexhibit.org/