You are here: Home / Fires/Accidents/Disasters / Semi plows through used car lot in Merrill 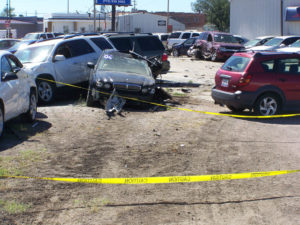 Cars wrecked by a wayward semi.

A semi driver plowed his rig through a used car lot in northwest Iowa over the weekend.

The accident happened in Merrill at about 2:20 a.m. Saturday. Authorities say the semi was southbound on U.S. Highway 75 and missed the curve coming into Merrill. Police believe the truck driver may have fallen asleep. Sixteen vehicles on the Liberty Used Auto Sales lot were damaged. Many were totaled.

Police say the semi pushed a couple of cars into the sales office and the building was damaged, too. The

truck driver was not injured. He’s from Minnesota, but authorities haven’t released his name.

There’s no estimate yet of the damage at the used car lot.