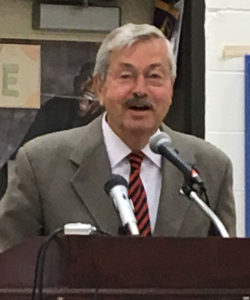 “IHA wants to emphasize that historically Medicaid fraud is extremely rare in Iowa and that if MCOs were actually finding fraud in billing from providers, there would be news of indictments for these supposed crimes,” she said.

The association represents 118 Iowa hospitals. Ginty said those hospitals are having trouble getting proper payment from the three private companies.

“Instead of fraud, providers are seeing a sharp increase in unpaid or denied Medicaid claims from the MCOs due to increased prior authorizations, unclear claims filing procedures and complete confusion by the MCOs on proper reimbursement requirements,” Ginty said. “…Rather than mislead the public with unfounded claims of fraud and abuse, IHA encourages the Iowa Department of Human Services to focus on real solutions to ensure managed care works.”

Governor Branstad released a statement Monday morning, saying “managed care is working for Iowa taxpayers by stopping improper payments.” According to the governor, there were $318 million worth of “improper” Medicaid payments to Iowa hospitals, doctors and other health care providers in 2014.

Since April 1 of this year, Dani Valentine of Iowa Specialty Hospitals and Clinics in Belmond and Clarion has tracked down nearly 30 payments due to her organization for care of Iowa Medicaid patients, but the checks were sent elsewhere. Some went to facilities in other states.

“When I follow up…we usually get the run around,” Valentine said. “We get told: ‘Hey, we’re checking into it,’ or we get no response whatsoever and I think that’s the part that has been the most frustrating.”

Confidential patient information has been misdirected by the private companies, according to Valentine.

“I hope something can be done about this because six months in and all of the issues that providers and patients are dealing with is deeply, deeply frightening,” Valentine said.

Jennifer Pearson, supervisor of patient services for UCS Healthcare in Des Moines, said none of the three companies that have been managing care for Medicaid patients since April 1 will pay for the prescriptions for patients trying to kick an opioid addiction, so her company has been covering the cost.

“We’ll not be able to sustain this for much longer,” Pearson told federal officials. “Approximately 375 patients will be affected if we can’t provide these services any more. Several people that are being successful in their recovery may be cut off of their medication, leaving them susceptible to relapse and huge setbacks from all the work that they have put in their recovery.”

According to the U.S. Substance Abuse and Mental Health Services Administration, methadone costs about $18 a day for out-patient treatment.

Officials from the Centers for Medicare and Medicaid Services held a “listening post” Monday for Iowans with concerns about Medicaid privatization. Governor Branstad’s office issued a news release about 90 minutes before the event began, saying there had been an “unprecedental level of outreach” about the switch to privately managed care for the 560,000 poor, elderly and disabled Iowans who are on Medicaid. Branstad Administration officials say they’ve held 365 meetings throughout the state during the past 20 months to talk with patients and providers about the switch. A new state law requires state officials to hold monthly “listening sessions.” The next meeting is this Wednesday, September 14 in Waterloo.