You are here: Home / Agriculture / Cash rent for crop land falls in Iowa 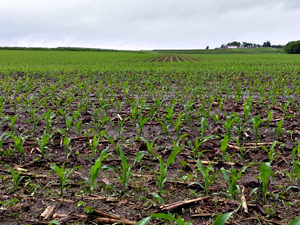 The U.S.D.A.’s National Agricultural Statistics Service’s (NASS) latest report shows the average amount of money farmers pay to rent land for crop production in Iowa has gone down again in 2016.

The report shows that average rent for cropland in the state of Iowa dropped 15 from last year — or about six percent — to $235 an acre.

The Deputy Director of NASS for the Upper Midwest Region, Doug Hartwig, says they gather information directly from the producers. He says they look at 100 percent cash rent, not a hybrid mix, and they break it down by cropland and pasture. Hartwig says the reasons for that shouldn’t be too much of a surprise.

“Looking out there and seeing what the prices are in the commodities and the livestock, you can probably correlate that back to that as far as lower crop prices are probably going to put pressure on that cash rent value to go down a little bit,” according to Hartwig.

Hartwig says the questionnaires are sent out in February, first by the mail-out/mail-back method. For those forms NASS doesn’t receive back, they do a phone follow-up or allow producers to report the information over the internet. By the time numbers are gathered, Hartwig says it’s usually an 80 percent response rate overall. He says the participation and high response rates allow them to provide accurate numbers for operators and landowners.

While average cropland rent dropped from last year, average pasture rent moved in the other direction — up $2 from last year to $52. That’s about a four percent increase. In further detail, the report shows that the south-central region of Iowa averaged the lowest rent for cropland, at $173 an acre, which is $62 below the state average. This region includes Union County, along with Clarke, Decatur, Madison and Ringgold. The next two lowest regions were the southeast and southwest. The southwest region includes Adair County, as well as Adams and Taylor. The average of $216 an acre is notably higher than the south-central, but still lags behind the state average.

The counties closer to the Missouri River showed considerably higher rent numbers. According to the report, the one county in the state with the lowest cropland rent value is Lucas County, coming in at $150 an acre. The northern half of Iowa appeared to bring the overall state average up. Northwest Iowa’s Ida County had the highest average cash rent for non-irrigated cropland, at $281 an acre, followed by Grundy County in northeast Iowa, at $277 an acre.

Individual counties are surveyed every two years, while the state average is done every year.